So, before JK charged in to raise our spirits, I sat down, Thursday morning, and in an effort to not stick my head in the toilet, decided to go through Maya’s judgement and break down the central conceptual moves and mistakes with a fine-tooth comb. It’s an absolute mess and dissecting the full form of the mess got a little bit (ahem) out of control. Still, #IStandWithMaya, and this is a core part of my beat, so, here we go….

The judgement functions by applying what’s known as the ‘Grainger criteria’ (see Grainger plc v Nicholson, 2010) to establish whether a philosophical belief constitutes something worthy of protection. The criteria stipulates that the belief must be a) genuinely held, b) a belief and not an opinion, based on present available information c) pertain to a weighty or substantial aspect of human life and behaviour d) have a level of cogency, seriousness, cohesion and importance and e) be worthy of respect in a democratic society as well as being not incompatible with human dignity or conflict with others’ rights. It’s important to note that what’s purportedly not under consideration here is whether the belief is true, scientific, or based on what many people consider to be a basic material fact about the world. When the case was being heard, many people asked why our political position was being defended under the rubric of ‘philosophical belief,’ to which the long and short answer is, ‘because the law has no provision for protecting people for stating material facts.’ Which is all of no small consequence, given that, at least from our perspective, the crux of this case is whether it’s permissible to state material facts if those facts cause some people emotional distress, or, in twitter rubric, it’s boils down to ‘facts vs. feelings’. Given this, whether the facts at the core of gender critical belief are, in fact, facts, is absolutely central to whether you think it’s reasonable, or reprehensible, to both hold and express them. It may be that because (allegedly) that’s not what’s under consideration here, the law is a badly made instrument for dealing with this question. Particularly when, I’d argue, the judgement only makes sense if you take the view that biological sex isn’t real, which – even though it’s purportedly outside the purview of the judgement – the judge, in fact, does.

Here we find that, just like trans activist discourse itself, the judgement is maddeningly circular. If it is the case that biological sex exists then this judgement simply falls apart in several places. Judge Tayler’s operating ontology surfaces in his refusal to recognise that for women to adequately express their political critique of trans activist demands it is necessary to point to sex and sometimes, even, to the sex of specific individuals – a refusal which effectively corresponds to an easy dismissal of the political stakes for women, and a blunt lack of respect for our specific political interests. The half-explicit denial of sex is also central to Tayler’s refusal of Maya’s claim that the GRA creates a legal fiction, a refusal that makes sense only on the basis of denying that there is any difference between legal and ontological sex. By suggesting that there is only the man-made structure of ‘legal sex,’ Tayler is effectively asserting the priority of the ideal/cultural over material/biological reality. Here, legal sex (like it’s conceptual twin ‘gender identity’) trumps/erases biological sex, and the judgement itself turns out to be a perfect performance of the core of the ideology we were seeking to show we had a lawful right to resist.

END_OF_DOCUMENT_TOKEN_TO_BE_REPLACED

So, for safety sake, I’m going to delete some of my tweets from yesterday. Given the general hilarity that ensued, I thought I’d preserve some of the threads before I do… 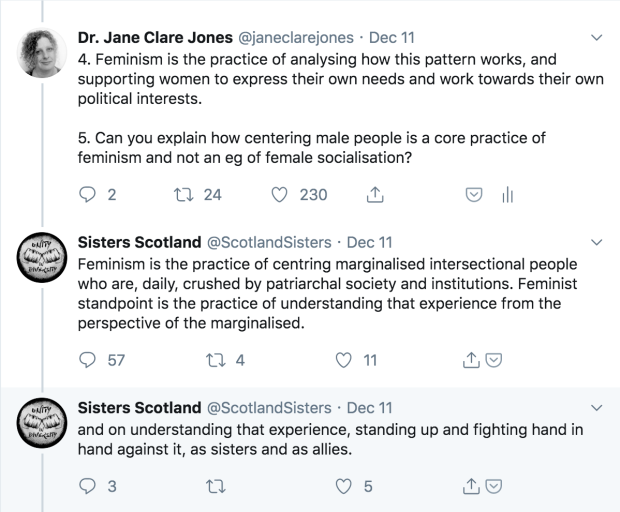