The argument proceeding from clownfish.

The argument proceeding from strawberries.

The argument proceeding from seahorses.

“Intersex people are as common as redheads, so sex does not exist.”

“Sex is a spectrum, so males are female.”

“Bio-essentialism!” (Is that like thinking horses and carrots exist?)

“Everything is a social construct.”

“Because women are Black, disabled, poor, gay, etc,. women do not exist.”

“Everyone who says they are trans is trans. Except destransitioners. And evil witches. (Ask Owen Jones. He decides. With his sorting hat.).”

“Men would never bother identifying as woman to abuse women and children.”

“Sex is assigned at birth based on arbitrary genital configurations.”

“Michael Phelps has got big feet so sport is never fair.”

“Cis women are not oppressed as such.”

“I earned my womanhood. So I’m more of a woman than you.”

“I feel like a woman and I have biology therefore I have female biology.”

“Some women don’t have uteruses, so males can be women.”

“But my gold lame pocketbook!”

“Sometimes a male brain grows a woman’s body by mistake.”

“Women are not oppressed on the basis of their sex. They’re oppressed because they wear lipstick.”

“Sex is an outdated concept.”

“Woman is a palimpsest.”

“Woman is a loose shifting constellation of biological, political and cultural phenomena that varies according to context, time and space.”

“Woman is a void to be filled by other people’s desire.”

“One is not born, but rather becomes a woman.”

END_OF_DOCUMENT_TOKEN_TO_BE_REPLACED

My god, what a shitshow.

As we all know, yesterday Labour released their new manifesto, in which they made the following pledge:

Twitter erupted, I may or may not have done a backflip, lots of people were rightly more sceptical, and then there was a great deal of anger and name-calling from those who – given how polarised this whole thing now is – we may as well just call ‘the other side.’ 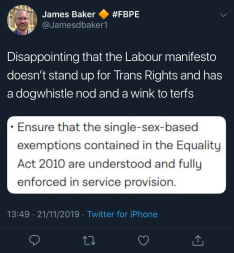 Since then, a great deal of smoke and obfuscation has been cast over the pledge. Firstly by Ellie Mae O’Hagan – whose loyalties in this battle are well known (oh hai Owen) – and then subsequently by Dawn Butler, who at this point I think we may as well just regard as a fully paid-up TRA.

There is a lot to say about this. The first is that both the statement Ellie tweeted, and Dawn’s statement, would seem to directly contradict the pledge made in yesterday’s manifesto, and notably – how odd! – they use exactly the same language to do so. The key phrase here of course is ‘no spaces will be permitted to discriminate against trans people.’

END_OF_DOCUMENT_TOKEN_TO_BE_REPLACED

So, last night this thread turned up, which Lorelei pointed to, because she was, quite rightly, objecting to what she saw as the erasure of the material basis of her disability. It kind of blew my mind and infuriated me in equal measure, and I was wondering if I should get out my virtual pens and scribble all over it. I decided to, partly because what blew my mind and infuriated me might be usefully illustrative, and also, in good part because one of the awesome Scottish women told me that Harry is becoming something of an intellectual star up their way, and so, there might be some service to them in thinking through why this is such a philosophical clusterfuck.

Let’s start by summarising Harry’s main argument. There are two main prongs. The first relies on Harry’s creation of the character of the ‘straw tran,’ who is, basically, the character we claim could abuse self-ID procedures and declare themselves trans for nefarious purposes. As suggested by the nomenclature, Harry’s assertion is that this person could not and does not exist (Wax. My. Balls), and moreover that it shows ‘complete ignorance’ to think this person could exist, because this person does not conform to what Harry understands to be ”actual trans lives.” There is a lot of half-reasonable stuff here (I’ll get on to why only half-reasonable in a mo), about ‘performative gender’ as a “whole set of ways of being in the world over time,” and social identities as “historical being in the world,” and how such identities are not just assumed and lived on the basis of singular speech acts. All of which indubitably conveys Harry’s experience of their own transness and maybe of many of their community, and all of which has absolutely no bearing on the fact that self-ID procedures would involve only a single declarative act and that checking people are involved in a process of meaningful lived transition is precisely why we have the current gatekeeping system embedded in the GRA. So basically Harry, you’ve just produced a really decent account of why the current system is a good idea, and the only thing you’ve got to ground your claim that it’s not is the baseless assertion that there are only good actors in this situation. Which is to say, the baseless assertion that creepy as fuck predatory males do not exist and will not manifestly abuse loopholes around the safeguarding of women and girls. To which I repeat: Wax. My. Balls.