So, the lovely people over at UKIP have produced this gem: 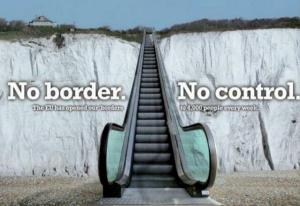 You don’t have to be a paid-up Freudian to notice something about this image. You don’t have to reach. The gentle folds of the virginal WHITE cliffs of Dover. The big BLACK ‘escalator’ with it’s perspex balls ascending into a crevice. The wiry fronds of grass.

I’m not suggesting that whichever mastermind minion of Farage who thought this was a good idea actually knew what they were doing. But it’s nonetheless revealing. Of the way in which the penetration of the sovereign body of countries, and the bodies of women are so thoroughly enmeshed in our thinking. This is a theme that comes up over and over again – and was particularly notable in the ‘manifesto’ of the Norweigan ethno-facist and mass murder Anders Breivik, as I have written about here and here. It reminds us whatever palatable spin UKIP tries to give its policies, underneath is the same old patriarchal-racist obsession with the purity of the people, and it’s associated concern with the purity of the women whose job it is to produce those people.