I’ve been thinking a lot about totalitarianism of late. About what I’ve started to call the ‘ontological totalitarianism’ of compelling us to believe in legal fictions, and about how that then manifests in the totalitarian political strategies of the trans rights movement. Another aspect of this general tendency is also playing out in academic discourse – and in some ways, because I’m a (mostly itinerant) academic, this is the one that really gets me where it hurts. The civic function of the academy, and especially the function of my own discipline, is to hang around in the public square and ask a ton of annoying, difficult and impertinent questions. We are supposed to be a Socratic pain the ass. We are supposed to hold public and political discourse to account. And we are supposed to stand there pulling gratuitously rude faces when people with political power spout incoherent twaddle, or when they make legislative proposals that have potentially awful consequences.

Which is all to say, I spend a lot of time on the phone at the moment ranting with my best friend about how the academy is flagrantly failing in its civic duty – at a time when the humanities are particularly under threat – and about how a whole load of people should frankly be ashamed of themselves.

One of the things that is going on here, of course, is that people are scared. All of us who have spoken out on this have received numerous messages from colleagues, offering support and agreement, and explaining at length why they feel unable to say anything. (In the case of junior academics with insecure employment, let me just say, I hear you, and neoliberal precarity is totally part of the story here). Along with many others I put my name on a letter this week protesting the harassment of academics who want to speak about, write about, or do any kind of research about the multiple theoretical and practical issues thrown up by the present dominance of transgender ideology. But that’s not what I want to talk about here. What I want to talk about here is the many many academics who are not just keeping their heads down and hoping this thought-policing will come to a blessed end soon. Rather, I want to talk about the ones who are actively supporting and enforcing it.

When I first encountered trans ideology about six years ago, it never occurred to me in a million years that the academy would just roll over for this pile of cobbled-together, anti-materialist, life-denying, patriarchal, bullying bullshit and ask it to tickle its tummy. The whole thing is a reality distortion cognitive dissonance machine. It’s an exercise in mass gaslighting that relies on a concatenation of double-thinks. And I had supposed, naively it turns out, that the people who are paid to think about things, would, y’know, think. Quite why it has prompted not inquiry, but compliance, is complex. It has, in the first instance, a lot to do with a catastrophically clay-headed application of the analysis of oppression. With the fact that people have just lapped up the cis-trans binary and the claim that women are the ‘oppressors’ of trans people, and that their political interests are, therefore, the interests of the dominant class (yeah, because radical feminists have so much institutional power, don’t they, Professors of Gender Studies?). For those of you still labouring under the illusion that the trans rights movement is simply an emissary of the oppressed, that they have no political power, that they are challenging entrenched interests, or that their agenda represents a significant challenge to the status quo, I give you Exhibit A: 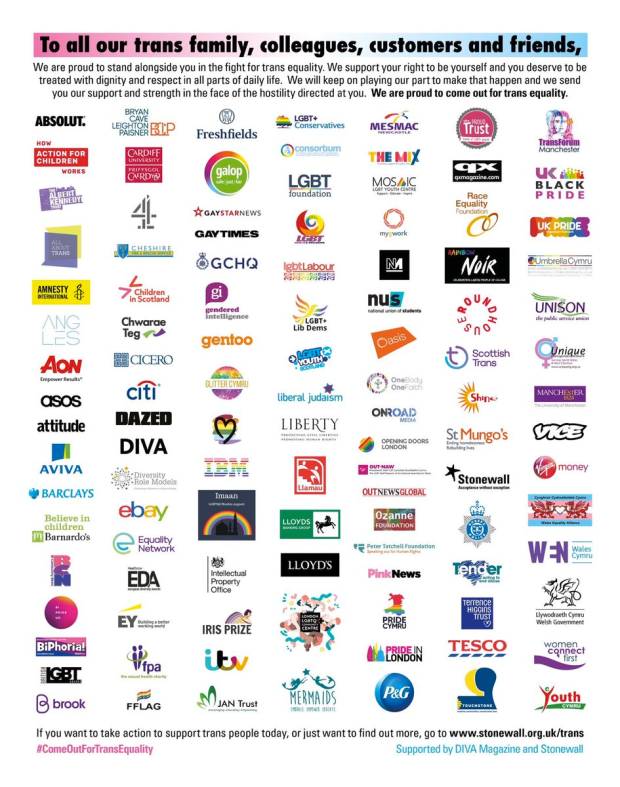 The other major factor in why this ideology has been so easily absorbed by the academy is, however, down to the dominance of what we’ve been talking around over the last few months – the pre-eminence of what we might call a ‘discourse all the way down’ model of reality. I’m not here, intending to ally myself with the Pluckrosean faction and start banging a drum for a simple return to objectivism (because yeah, that always collapses into a ‘view from nowhere’ which is also, often, ‘a view from privilege’). However, as I’ve been trying to map out, the problem, as always, is with the way these two positions are structured in an opposition that excludes the space between. Reality is made between subjects and objects, between the subjective and the objective, between culture and nature, between ideas and material limits. It is as wrong-headed to think it’s all a matter of objective facts as it is to think it’s all a matter of discourse. But the present problem plaguing the humanities is the extreme seduction that has been performed by the idea of ‘discourse all the way down,’ and the way this is implicated in the enthusiastic adoption of the idea that there is no such thing as male and female bodies, and the further thought that anyone who thinks there is is obviously an oppressive bigot.

The extreme seductive power of this idea – as I allude to in places in this conversation – is that people get really overexcited by the thought that if oppression, and injustice, are simply ‘described into existence,’ then they can, relatively simply, be ‘described out again.’ The foundation of this thought is Foucauldian, and it rests on thinking that there is no ‘natural’ psychophysical reality, or material structures, that underpin and limit discursive possibility. As I point to in this discussion, this leads, in the case of Foucauldian feminist discussions of rape for example, to the absurd, idiotic, and frankly seizure-inducing idea that the only reason why rape is harmful is because feminists have gone around saying it’s harmful, and that if we all just shut up about it the harm would magically disappear in a great big puff of smoke. That is, for Foucault, discourse is not primarily descriptive of any reality, but is, essentially productive of that reality (again, here we find a failure to think the interaction between description and production). And this has had, more or less consciously, a powerful effect on how people think about the function of the academy. Rather than studying and describing social phenomena and producing analysis to critique, challenge and transform the world, the academy becomes only an organ for producing social reality through the production of discourse.

To many, this all has a nice liberatory patina to it. Or rather, it has nice liberatory patina to those people who didn’t, like me, feel a kind of cold ontological shock spread up their spine when they read 1984 and grasped the fundamental danger of constructing consensus reality through duplicity and coercion. To be honest, it pretty much blows my mind that in the middle of post-truth Trumpian tyranny there are still people running around inside universities who haven’t started wondering whether this ‘discourse all the way down’ business is really quite what it’s cracked up to be. And it blows my mind even further that they haven’t started to realize that claims about the limits of materiality – or the ‘2+2=4ness’ of the world – are not always oppressive cultural norms masquerading as nature in the interests of the powerful, but are actually also – sometimes – the material bulwark against the reality distortion that power puts in place.

With respect to trans politics it seems many people are still stuck at thinking that we can remake the world with nothing but our minds. We can bend ourselves into mental pretzels to argue that human sexual dimorphism is a social construct, and we can fantasize that the abolition of sex will yield the abolition of sex-based oppression. Anyone who doesn’t comply with this fantasy, who goes around doggedly insisting that sex, is, in fact, a thing, and that no amount of rhetorical jiggery-pokery and discursive control will actually make it not-a-thing, becomes, then, an emissary of oppression. And this then yields a situation in which we find certain feminist academics vociferously insisting that other feminist academics should be censured – and not even engaged with – for committing the crime of believing sexed bodies to exist, for allegedly ‘weaponising’ such bodies, and for not complying with the demand that consensus reality be refigured around the erasure of those bodies. (We’re feminists, what did you think we’d say when you tried to erase female bodies. I mean. Come the fuck on). That is, what this yields is a form of academic totalitarianism in which many academics completely forget that the university is supposed to serve society by doing discursive interrogation, and commit themselves to making it, instead, a pure instrument of discursive political control.[1]

Which is all to say, great work with the liberation guys.

[1] To be clear, I’m not aligning myself here with the argument that has been coming out of the right for years about the inherent coerciveness of say, critiquing someone for being racist. The role this argument has played in convincing well-meaning left-leaning academics that our concerns about trans ideological totalitarianism are just free-speech arguments covering for a reassertion of power has been considerable. So, I want to say clearly, the difference here is between thinking that social phenomena like structural racism or rape culture are social constructs (which in large part they are), and thinking that sexual dimorphism is a social construct (which is isn’t). It is the case that presenting social phenomena as natural in order to make them appear to be a social inevitability is ideological and politically dubious. It doesn’t follow from that that thinking natural phenomena are natural is politically motivated and ideologically dubious. What is going on with trans ideology is the insistence that something natural be perceived as constructed, and the attempt to socially coerce that perception. That is, there is, between racism and the perception of sexual dimorphism, a meaningful difference. The analogous statement to ‘there are male and female humans’ is ‘there are black people’ (indeed, race is more socially constructed than sex, but nobody is arguing that we will overcome structural racism by pretending, and coercively insisting, that black people don’t exist – and, in fact, most left-leaning people would be horrified by that). So, I am not saying that there is something totalitarian about the attempts by academics to critique and change oppressive structures of power. I am saying there is something totalitarian in attempting to enforce compliance with a belief that something which is manifestly a thing is not, in fact, a thing. That is, this all comes back down to, at base, the point about the ontological totalitarianism of compelling belief and perception with regard to what is, in fact, a legal fiction.